"Exercising, learning to cook and watching the documentary Chang’an Meets Rome are what I do every day during the Spring Festival!"

Due to the sudden outbreak of the novel coronavirus epidemic across China, most people have no choice but to remain at home all day in order to curb the further spread the virus. Fortunately, the 100-episode 4K micro documentary Chang’an Meets Rome (Season I), which was broadcast on CCTV 1 and CCTV 10, respectively, from January 28 and January 30, has become an indispensable part of many people's "homestay lives".

In just 5 Minutes, it Spans Ancient and Modern Times across 2,500 Years to Explore Silk Road Civilization through the “Tales of Two Cities”

Chang’an Meets Rome was planned by China Media Group, and was co-presented by China International Television Corporation (CITVC) and the Social and Education Program Center of CCTV, both of which are affiliates of China Media Group, as well as Xi'an Broadcasting Corporation, Iqiyi.com and others. The first season of the documentary covers 50 episodes across five series: The Code of Civilization, Social Life, Millennium Art Gallery, Trade and Commerce on the Silk Road and Military Exploration, with 5 episodes per day for 10 consecutive days.

Each episode of Chang’an Meets Rome is only five minutes long. Spanning 15,000 kilometers and 2,500 years, Chang'an and Rome are thousands of miles apart, but possess countless connections between these two great cultures. Chang’an Meets Rome breaks down major topics such as Silk Road civilization and the spirit of the Silk Road. With experts' on-the-spot exploration and experiential shooting as its main forms of storytelling, while also reviewing the memories of the ancient Silk Road, Chang’an Meets Rome explores more practical strength in the intersection of ancient and modern times. The program team invited a number of well-known contemporary Chinese scholars and Italian experts to interpret for the audience and guide a journey of exploring the legend of Silk Road civilization from the details. In the parallel perspective of "the Tale of Two Cities", the history and reality of different cultures and the peoples of the two countries are closely linked through small stories and many details of life. Through easy-to-understand narrations and dialogues across time and space, the documentary decodes the genes of the civilization of the millennium. Today, under the Belt and Road Initiative, China and Italy are closely linked and working together to jointly write new stories and chapters, bringing forth new vitality.

Li Ruiyu, former ambassador of the People's Republic of China to Italy, said: "This documentary has both historical depth and broad vision. While showing the brilliance and achievements of the two civilizations, it also reveals the philosophy of ‘things all sharing the same nature’ from different perspectives and fields. The scenes in the program are very beautiful, and in particular, its use of color is artistic and pleasing to the eye."

Wang Yiwei, a renowned scholar of Belt and Road studies and Professor of the School of International Studies, Renmin University of China, believes that the program Chang’an Meets Rome elaborates on the spirit of the "Silk Road" in a unique form, and that the program is a vivid expression of President Xi Jinping's advocacy in transcending cultural misunderstandings through exchanges of civilizations. Additionally, it transcends cultural conflicts through mutual learning of civilizations, and transcends the superiority of civilizations through the coexistence of civilizations. Wang added that this documentary series contributes to the construction of a community with a shared future for mankind.

Francesco Rutelli, Former Deputy Prime Minister of Italy and Chairman of the Italian National Association of the Film and Audiovisual Industry, said that Chang’an Meets Rome promotes the exchanges between China and Western countries and consolidates the friendship between China and Italy, using movies and TV series as a bridge.

"It's a great honor that Rome and Beijing became Twin Cities 20 years ago when I was mayor of Rome,” Rutelli said. “Today's world is becoming more and more polarized. Combining the stories of China and Italy's two major civilizations will make the two countries the protagonists of world peace and development in the 21st century. Therefore, the historical stories between the two ancient cities are also about the future."

Luca Bergamo, Deputy Mayor of Rome in charge of cultural development, said, "I think this 100-episode micro documentary will have a huge impact on the future, so that we can better create a future based on deepening understanding. Thank you for the opportunities and lessons Chinese culture has brought to us and the world." 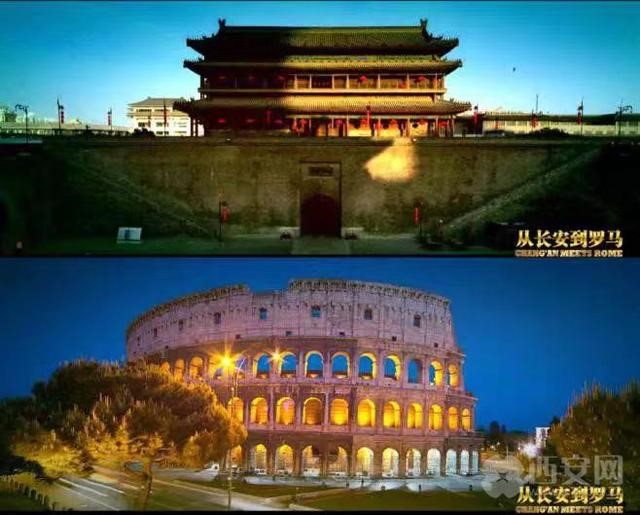 From Culture to Communication, the New Silk Road Stories of "Convergence” Light up the Screen

Chang’an Meets Rome employs ultra-high definition 4K techniques to outline a historical blueprint of the evolution of human civilization, mutual learning and integration in a simple way through short videos. Through trivial content and with vivid and flexible form, it highlights its features as “a micro documentary with plain expression". After becoming available on TVs and mobile terminals, the program sees benign interaction and traffic migration between big screens and small screens, arousing resonance among the audience and pushing audience ratings higher.

The broadcast of Chang’an Meets Rome has also received extensive media attention. CCTV, People's Daily, Xinhuanet.com, Guangming Daily, Xuexi.cn and other mainstream media and new media platforms in the movie and television industry have published a series of reports, professional analysis and comments, and continued to broadcast a series of short videos and track audience feedback on social media platforms. This attention has triggered a viewing boom while prompting phenomenal discussion on related topics.

The program team of Chang’an Meets Rome, who highlighted the characteristics of convergence communication, produced six short videos and uploaded them to Kuaishou.com, Tik Tok, Weibo and other platforms. As of 5 p.m. on February 8, these short videos had reached more than 20 million views, and had received 200,000 likes. In addition, the topic “Chang’an Meets Rome” posted on Sina Weibo had been read 630,000 times.

The popularity of the program during the Spring Festival and the spread of the novel coronavirus epidemic led to Chang’an Meets Rome gaining a large number of new fans during this long "holiday". According to official statistics, among audience members who watched the program online, those at 25-35 years of age and with a bachelor's degree or above accounted for the largest segment, and highly educated young people became the largest audience. Some comments online exclaimed the following:

"This documentary is like a real journey! Staying indoors, we can not only gain knowledge, but also satisfy our eyes!"

"The collision of cultures sets out new sparks."

"This well-made program goes from shallow to deep, and I watched all 20 episodes in one go."

"The collision of history and modernity, the convergence of art and culture."

"Crossing the ancient and modern Silk Road, it sings the spirit of the Silk Road!"

"Each episode lasts only five minutes, and watching it is just like playing a video on Tik Tok. I have thus developed the habit of comparing lifestyles between Chang’an and Rome. I really like micro documentaries such as this, which are small but show something big."

“It's great to have cultural height, historical depth and details of life."

Some other comments explained the following:

"I hope to see more documentaries with both historical connotations and modern vision. After watching the documentary, I want to walk on the Silk Road, enjoy the continuous music, and look for and think about the essence of Eastern and Western civilizations."

Some members of the audience have even said that they hadn’t seen enough of the program, and were expecting more!

The exploration tour of Chang’an Meets Rome (Season 1) has come to an end. But the program's exploration of civilization has not stopped, "because we are eager to look back at the great history of human beings from ancient times to the present, where there lies endless wisdom and legends." It has been reported that China Media Group will launch 50 episodes of Chang’an Meets Rome (Season 2) in succession, and there will be different versions such as a long documentary version and a European version. The program will also be translated and dubbed into more than 10 languages, including English, Italian, Indonesian, Khmer, Arabic, Nepalese, Japanese, Afrikaans, Myanmar language, Portuguese and Serbian, and broadcast on the TVs and new media platforms of several member countries of the Belt and Road Media Community.

At present, the epidemic situation remains grave. In such an extraordinary period, one can kill time at home watching this "Tale of Two Cities" about convergence and mutual learning between Eastern and Western civilizations.