Once the wind blows, you must set sail. From September 11-13, the 2018 Belt and Road Media Community Summit Forum was held in Xi’an. The Summit Forum was guided by the State Administration of Radio and Television, hosted by China Media Group, organized by China International Television Corporation and the China Radio, Film, and Television Programs Exchanging Center, and co-organized by the Xi’an Broadcasting Station on the theme of “New Era, New Achievements, New Breakthroughs”. This is the third Summit Forum since the establishment of the Belt and Road Media Community (the “Community”), and the first to be hosted by China Media Group.

About 300 guests attended the Summit Forum to discuss future cooperation and development plans, among them, there are Wang Yongkang, Member of the Standing Committee of CPC Shaanxi Provincial Committee, Secretary of CPC Xi’an Municipal Committee, Xue Jijun, representative of China Media Group, Chairman and President of China International Television Corporation, Zhou Jihong, Deputy Director of the Department of International Cooperation of the State Administration of Radio and Television, Abdelrahim Suleiman, Director General of Arab States Broadcasting Union (ASBU), JP Bommel, CEO and President of the National Association of Television Program Executives (NATPE), and the representative members and partners of the Belt and Road Community and the Silk Road Cities Broadcasting Consortium.

This year also marks the third year of the Belt and Road Media Community’s development and advancement. Over the course of the past few years, the Community has carried forward the spirit of the Silk Road, and continuously rallied all parties, and consolidated the public opinion foundation for the Belt and Road construction and cooperation under the principles of openness and inclusiveness, mutual discussion and joint construction, market-oriented operation, and orderly progress; adhering to mutual discussion, joint construction and sharing, the Community has carried out extensive and practical communication and cooperation in aspects of international co-production, “Golden Ribbon” outstanding program selection, television program simulcasting, cooperative operation of channels or time slots, program trading and information resource sharing.

Wang Yongkang, Member of the Standing Committee of CPC Shaanxi Provincial Committee, Secretary of CPC Xi’an Municipal Committee, expressed the hope that we should seize the Summit Forum as an opportunity to learn from each other, further strengthen cooperation with the media institutions and all circles of society of various countries and regions, constantly expand the “circle of friends”, learn from good experiences, develop fusion media, adopt new techniques, share the strategic opportunities of the Belt and Road, and jointly create a new high ground for the development of the fusion media. 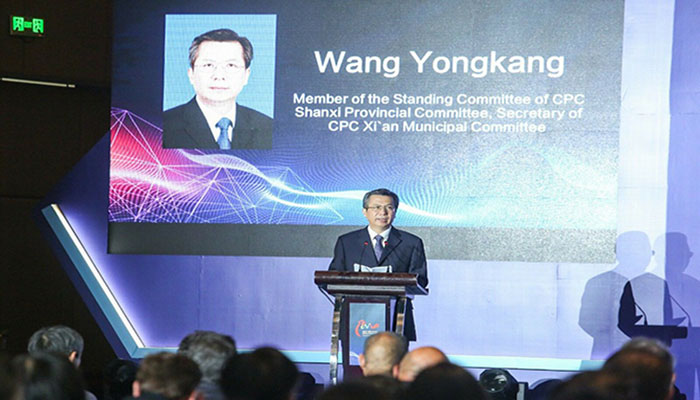 In his speech, Xue Jijun, representative of China Media Group and chairman and president of China International Television Corporation, said that the event was one of the most important to be hosted by China Media Group since its establishment. Following its establishment, China Media Group has made it its key goal to build an international first-class state-level modern media carrier, firmly seize this historical opportunity, effectively integrate superior resources, deepen integrated development and build itself into a comprehensive media conglomerate with the largest scale, the highest number of business formats, the largest production capacity and the widest coverage in the world. It has insisted on guiding its work based on Xi Jinping’s socialist ideology with Chinese characteristics in the new era, continuously deepening the integration of China Central Television, China National Radio and China Radio International (“three stations”), maximizing the use of resources, effectively advancing the establishment of new media, significantly improving international communication capabilities and emphasizing the innovative application of new technologies, new models and new business formats. In addition, China Media Group has firmly held a dominant position and led industry trends in the coverage of major events, the interpretation of important information, commentary on key current affairs and the development and broadcast of film and television dramas, documentaries, variety shows and other areas, all of which demonstrate its strong power in communication, influence, leadership and credibility. 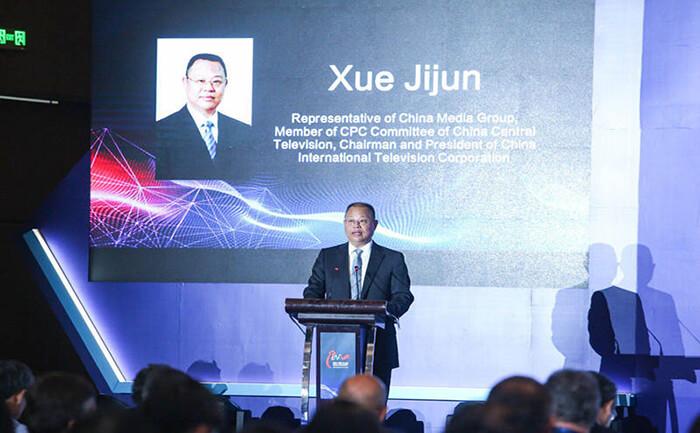 Xue Jijun, Chairman and President of CITVC, speaks at the opening ceremony

Zhou Jihong, Deputy Director of the Department of International Cooperation of the State Administration of Radio and Television, said that the State Administration of Radio and Television will continue to support the Silk Road media cooperation, build more platforms and create more channels to help the media of all countries and regions find a way to know and understand each other, and develop together through mutual learning and reference. 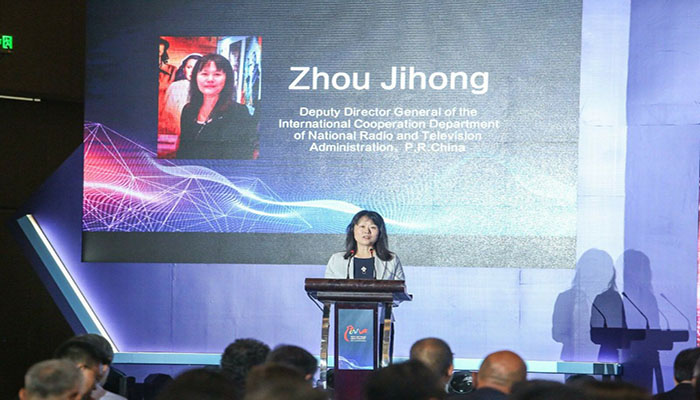 (Zhou Jihong, Deputy Director of the Department of International Cooperation of the State Administration of Radio and Television, speaks at the opening ceremony) 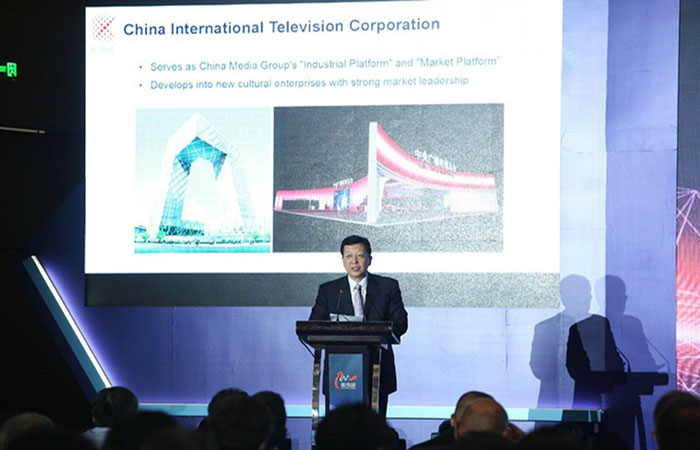 Film and television co-production is one of the best ways to enhance the mutual understanding of Chinese and foreign cultures. The TV drama Origin, co-produced by China International Television Corporation, Sony Pictures Entertainment of the United States and Left Bank Pictures of the United Kingdom, premiered at the Summit Forum and broadened viewers’ horizons through a thrilling outer space adventure.

Among the co-produced programs released at the Summit Forum, documentaries account for the greatest number. “The documentary is the film genre that can reduce the ‘cultural discount’ most,” an analyst pointed out. “Because of its authentic nonfiction narrative and vivid expression in film, it’s easy for a documentary to overcome cultural barriers and be accepted and understood by most people.”

From Chang’an to Rome will be co-produced by outstanding documentary production teams from both China and Italy. They will visit every corner of Xi’an and Rome in order to tell a great story of human civilization from a pluralistic international perspective. Meanwhile, Silk Road to Northern Lights will witness the beautiful friendship that exists between China and Canada, and convey mankind’s admiration and love for nature by documenting and recording the world heritage of China and Canada. In addition, another documentary called Approaching China: Jean-Pierre Raffarin Witnesses 40 Years of Great Change will explore China’s omni-directional, multi-level and wide-range reform and opening up based on the trips and visits of former French Prime Minister Jean-Pierre Raffarin. The documentary will integrate and showcase the elements of reform and opening up, intelligent innovation, humanities stories and other areas of focus. 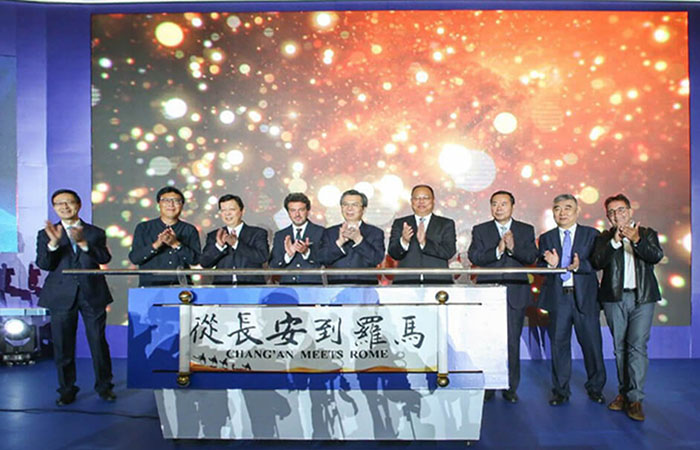 (A number of projects are signed at the Summit Forum)

In terms of the cooperative operation of channels and time slots, the Summit Forum released the results of cooperation with countries including Portugal and Sierra Leone. This year’s “Golden Ribbon” outstanding program selection project covers short documentaries. The 2019 “Golden Ribbon” multinational coproduction program Silk Road in My Eyes was also officially launched at the Summit Forum. The overseas media coproduction team will explore deep into the cities and regions along the Silk Road to seek out the deep imprint of Silk Road culture, as well as explore and experience the true meaning of Silk Road culture and document it with cameras.

Friendship, which derives from close contact between the people, holds the key to sound state-to-state relations. The language of film and television is the common artistic language of human beings, and is also deeply imprinted with the unique political, economic and cultural characteristics of various countries and regions. Seeking harmony but not uniformity, the cooperation and development based on mutual discussion, joint construction and sharing advocated by the Belt and Road Initiative will surely lead to win-win development and common prosperity. 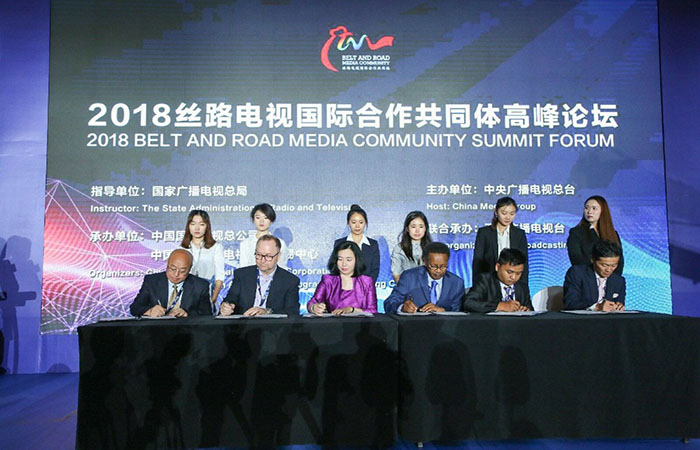 (A number of key projects are signed at the Summit Forum)