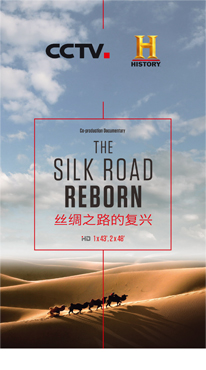 China central television broadcast production of famous documentary made over a year, all the way around the "cumulative travel 200000 km, crossing four continents, involving more than 30 countries and more than 20 domestic provinces and cities along the autonomous region.

In “1belt 1 road”, more than 50 people from various circles of international and more than 60 ordinary people being interviewed

All the way around the "documentary along the continental silk road and the tracks of the Marine silk road along the present China and countries in infrastructure interconnectivity, financial industry economic and trade cooperation, cultural exchanges, the important progress of ecological cooperation.

To illustrate the grand strategy with small stories, it is proved that One Belt And One Road is not a Chinese solo, but a chorus of countries along the belt and road.

China's "neighbourhood", not only the culture of the ancient story, at the same time also has the economic, cultural and historical significance of the new era, in the global scope widely attention, A + E network and its History Channel also took aim at the subject for the global mainstream audiences the international version of" the new silk road of China ".

History Channel, launched in 1994, is the world's leading documentary and real entertainment TV Channel, covering 90 million users in the United States and through A + E broadcast television network in the global 39 languages, covering more than 160 countries, more than 330 million home users, in the United States and Asia in real entertainment Channel ratings for the first, and has set up A new digital channels and more screen market.